Google has so many conflicts of interest, e.g. delivering the highest quality “organic” search results vs. tolerating high ranking sites that clearly have no purpose other than to make money from Google AdSense (i.e. “made for AdSense” sites). There’s also pay-per-click arbitrage, where someone buys keywords in Google AdWords in order to send users to a site with higher paying Google AdSense ads (although arbitrage can be done between Google and other ad systems).

Despite the millions (perhaps even billions) that Google makes from such “gaming” of it’s system, it appears Google has concluded the potential downside to the reputation of its AdSense network outweighs the upside of easy money (via JenSense):

Numerous AdSense publishers have been receiving emails from Google the past couple of days stating that their use of their AdSense account is an unsuitable business model and that accounts would be disabled as of June 1st, giving publishers about two weeks notice to prepare for the loss of the AdSense accounts… and since it seems that arbitrage publishers are the ones receiving this account disabled email, to give those publisher enough time to shut down accounts or use an alternative source for their outgoing traffic.

Right now, I have only heard from those doing either “Made for AdSense” style of sites or those doing arbitrage, and it does include publishers making significant money per month ($10,000 USD and higher). So they are not giving a pass to those who are earning above a certain threshold. And it seems that no one who is outside of the arbitrage/MFA area of AdSense earnings has been affected thus far.

Google has taken other steps to try to crack down on gaming of its advertising system, such as instituting a “quality score” to try punish AdWords advertisers who send users to sites that do nothing but try to manipulate more clicks — and cash — out of those users.

But it appears that even the quality score, which drives up keyword prices for AdWords abusers, wasn’t enough to weed out abuse in the system. Now Google has to shut down AdSense accounts one by one, and given the risk of shutting down non-abusing accounts, these are probably all getting reviewed by humans in a very un-Google-like human resource intensive fashion.

What’s most striking about Google’s crackdown is that they are literally turning away money — they must believe that any negative cash flow impact now will be made up by improving the health of the system.

So much of Google’s success has been driven by individuals, i.e. individuals who make money — in some instances a lot of money — by “working” the online ad marketplace. Individuals like ShoeMoney: 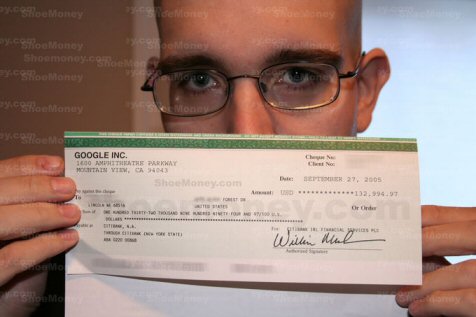 ShoeMoney has a video up telling his fellow arbitragers not to worry:

ShoeMoney makes the point that many bloggers who comment on arbitrage have never actually done it — presumably he’s referring to people like me — and he’s right about that. (I did attend the arbitrage panel at Search Engine Strategies, so maybe I’m not a total know nothing on the topic.) He also makes the point that many other search players, like Shopping.com, Ask, and Google itself, engage in forms of arbitrage. (Jeremy Luebke at Marketing Pilgrim makes a similar observation about Google hypocrisy, which is a well documented phoenomenon.) And ShoeMoney makes the very good point that arbitrage itself, in the abstract, is not a bad thing, i.e. it’s just “positive cash flow from a market imbalance.”

Indeed, here is certainly a big, complex debate to be had about what constitutes “abuse” of Google’s ad system and who is in fact guilty of such abuse. It may be, as indicated by ShoeMoney and by commenters on his post, that Google is only going after made for Adsense sites and not arbitragers who don’t use MFA sites. But it seems undeniable that, along the spectrum of individuals who make money off of “working” Google’s ad system, some are perceived by Google as not being worth the money — I have seen many references to AdWords advertisers opting out of having their ads appear in the AdSense network becuase of concerns about quality.

The question I’m interested in here is not the right or wrong of who does what with Google’s ad system, but what impact perceived abuses might have on the online advertising economy. Is it possible that potential for manipulation of open ad systems will slow their potential growth as online players like Google seek to grow in a more controllable, “healthy fashion,” i.e. to avoid growing in ways that alienate advertisers and suppress long-term growth?

For example, I found it curious that YouTube introduced its revenue sharing program in a very closed, very un-AdSense-like fashion:

â€œA select group of content creators will get promotion on the YouTube platform, and we will help them monetize their content,â€� said Jamie Byrne, head of product marketing, in an interview on Thursday. â€œThis will help erase the the stigma around the user-created content, and, to be honest, these guys are media entities in their own right.â€�

Why would YouTube just start sharing revenue with all of its users based on the number of times a video is viewed, like Revver and Metacafe do? One reason is concerns over the quality of content, i.e. the “stigma around user-created content.” But I’ll bet another reason is that YouTube’s owner, Google, is very wary of the potential for abuse. Pete Cashmore has documented how easy it is to game YouTube:

I complained over the weekend that YouTube is increasingly being gamed by users. I decided to test out how hard this would be – as it turns out, itâ€™s exceptionally easy to rank among the most viewed videos and channels by simply refreshing the page. This widespread gaming might also throw into question YouTubeâ€™s claim of serving 100 million videos per day.

So it’s possible that there is AdSense-scale money to be made in a distributed video advertising platform on YouTube — but Google still hasn’t figured out how to prevent the system from being gamed.

Traditional advertising has always been subject to abuse, such as when a media company treats a media buyers to lavish meals and entertainment, with the hope of “influencing” an ad buy. But on the open web, any system that can be abused will be abused to the extreme.

Billions of dollars in advertising is still sitting offline, waiting for the wild web to be tamed a bit more.

Digital media has unbundled content, disrupting legacy businesses that sell bundled media like albums and newspapers. But that doesn’…

What Is The Value Of Online Display Ads?