I was reading the New York Times public editor’s rebuke of the NYT McCain ethics piece that alleged an affair with a lobbyist, when a line at the end reached out and grabbed me by the collar (bold is mine):

The pity of it is that, without the sex, The Times was on to a good story. McCain, who was reprimanded by the Senate Ethics Committee in 1991 for exercising “poor judgment” by intervening with federal regulators on behalf of a corrupt savings and loan executive, recast himself as a crusader against special interests and the corrupting influence of money in politics. Yet he has continued to maintain complex relationships with lobbyists like Iseman, at whose request he wrote to the Federal Communications Commission to urge a speed-up on a decision affecting one of her clients.

**Much of that story has been reported over the years, but it was still worth pulling together to help voters in 2008 better understand the John McCain who might be their next president. **

Instead of focusing on unsubstantiated allegations of an affair, how might the NYT have better served readers and voters by “pulling together” a story that has been “reported over the years”? If they took a traditional approached, they would summarize that reporting in their own words, such that readers would only see what could fit in the limited number of column inches available.

But on the web, with its infinite space and connectedness, the Times could have added an important supplement to their own perspective in recounting the history of McCain ethics since 1991:

LINKS to the the actual reporting that has been done over the years.

For the occasion, I’m going to coin a new term: link journalism

It’s what I attempted to describe the other day in the post on Links As News, Links As Reporting.

Link journalism is linking to other reporting on the web to enhance, complement, source, or add more context to a journalist’s original reporting.

As a commenter on my last post observed, link journalism is not new on the web — bloggers have been pioneering it for years — but it is new to many journalists who have been largely focused on the print medium and are just now learning the ways of the web.

So what might the link journalism for that NYT piece on McCain ethics look like? I don’t have the time or resources of the four journalists who reported the original NYT piece, but here are a few links I pulled together on Publish2 (I’m currently displaying these headlines in the sidebar of the Publishing 2.0 blog using our widget).

Time: The Power and The Story
Far from making him more sensitive, the Keating Five scandal was a near death experience that changed the way he saw himself and the system. McCain had been at best a reformer junior grade. In fact, he voted against campaign-reform measures before being sucked into the sewer himself.

Boston.com: Pluck, Leaks Helped Senator to Overcome S&L Scandal
A decade ago, Senator John McCain’s role in the most politically corrosive episode of the $150 billion savings and loan debacle threatened to end a political career that now holds some promise of concluding instead with a McCain presidency.

Star Tribune: Campaign 2000; To compete, McCain takes cash from the very system he abhors
Now, as he runs for president as a white knight crusading to rid politics of “corrupt money,” his campaign’s chase for cash is tinged with irony: He is building relationships that, perhaps unavoidably, rekindle images of his Keating Five days.

BBC News: The gloves come off
In 2000 Republican Primary, the Bush campaign attacked McCain over his 1991 Senate Ethics Committee reprimand.

Arizona Republic: DeConcini’s memoir details tense relationship with McCain
In Senator Dennis DeConcini: From the Center of the Aisle, the former senator reflects on when he, McCain and three other senators were investigated by the Senate ethics committee in 1991.

Reason Magazine: How John McCain Reformed
In 1991 Sen. John McCain was reprimanded by the Senate Ethics Committee for his “poor judgment” in meeting with federal bank regulators who were investigating Arizona businessman Charles Keating, one of his campaign contributors. Ever since then, McCain has been trying to show he is not a hack politician kowtowing to special interests but a man of integrity and principle.

The standard journalistic technique for providing context and support for assertions is to quote sources, but on the web, the “link journalism approach” is to link to other actual reporting.

To support the assertion that concerns over McCain’s ethics have a long back story, which voters in 2008 should know about, what better than actually linking to the body of reporting that covered this story in the past?

Not sufficiently intrigued by this concept? Let me up the ante.

Check out these two articles from the 2000 campaign, the last election cycle when McCain ran:

Oh wait… you can’t. Unless you’re willing to pay for the privilege.

The rationale for paid access to newspaper and other print publication archives is that researchers and other people searching for archived articles for a specific purpose will be willing to pay for them — the archives don’t generate enough traffic to monetize through advertising, so why not charge for them?

A Google News archive search for “McCain Keating” for 2000 reveals lots of reporting potentially relevant to today’s voters, but it’s all locked behind a pay wall: 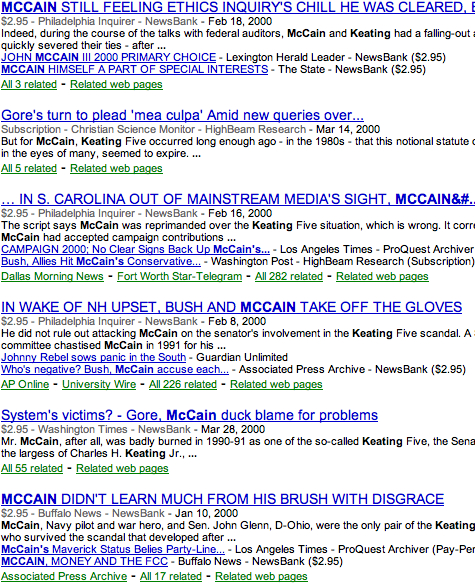 Well, what if link journalism could transform the newspaper archive from a dusty locked vault to a vibrant, dynamic part of up-to-the-minute news reporting?

Suddenly, a site like Time.com starts look really smart for making available for free this in-depth piece on McCain from December 1999: The Power and The Story

Imagine what link journalism could do to increase traffic to high quality journalism, old and new.

How do you save important journalism? Make it relevant again using the currency for relevancy on the web: links

Oh, speaking of traffic, what about the concern that link journalism will “send people away” from a newsroom’s own original reporting?

Just remember Google’s law of links on the web — the better job you do at sending people away, the more they come back.

Jack Lail at Knoxnews.com has created a regular feature on their Govolsextra .com by aggregating “Blogger Buzz” — these stories that do nothing but “send people away” have been regularly making the top 10 story list: 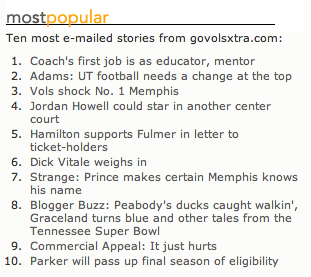 Jack tells me that one of these Blogger Buzz “send them away” link journalism stories this week was the #1 story on the site.

If you’re an editor or reporter and want to check out the McCain Ethics page I created, you can register for Publish2 and see it here. You can add to it simply by using the tag “McCain Ethics” — here’s the McCain Ethics tag page feed. If you’re interested in joining the Publish2 Election News Network — or using Publish2 for other news aggregation features on your site — email me at scott.karp at publish2 dot com

Microsoft announced today that they are going after the holy grail of advertising: integrated ROI measurement and tracking. The…

I wrote a while back that Facebook is not for business, i.e it’s not clear how an…