The New York Times has certainly embraced blogging, but it was striking to see in this post from The Lede just how much they’ve embraced link journalism:

Scanning the financial press this morning, readers would have seen a disturbing yet familiar burst of oil news: rising prices, aghast lawmakers and protests in Europe. But another piece of bad news topped off the fray, one that was much less familiar to close observers of the oil market:

If that’s an accurate assessment, prices are going to have to double another couple of times to bring demand into line with supply,” Kevin Drum wrote at The Washington Monthly. “$500 oil, anyone?”

Already, a financial blogger was out of the gate with a renewed call to boost domestic oil production

What prompted the new jump? It’s never an easy question to answer, as The Washington Post explained in its lead coverage today

As for today’s uptick to $135, another report from Bloomberg News blamed traders engaged in wrong-way betting. The wrong bet, by the way, was for cheaper oil.

Wow, just look at all the third-party sources linked here: Wall Street Journal, Bloomberg News, Washington Monthly, Washington Post, USA Today, and an independent blogger! The value for the reader here is enormous — not only do they get Times blogger Mike Nizza’s framing and perspective, they get links to all of this original reporting and analysis on this issue.

It’s great to see “the newspaper of record” has so evolved on the web — gone are the days when they to claim they have the last word on a topic or issue. The Times realizes that there is a rich universe of journalism on the web, and they can best serve their readers by helping them find the best reporting, alongside the NYT’s own gold standard reporting.

Here’s an example of why this isn’t just linking, but link JOURNALISM:

The Post article didn’t mention the new estimate on the future of crude. But Bloomberg News tacked it on to the end of an article suggesting that, far from being to blame for the soaring cost of oil, OPEC was in fact powerless to control it, according to one official:

OPEC has “no magic solution’’ to the surge, Qatar’s oil minister said. Prices are “out of the hands’’ of the organization, according to Libya’s top oil official.

In a traditional newspaper article, all of these facts and analysis would have been synthesized, but the reader wouldn’t have had the opportunity to read for themselves the source material. This post does what journalism is supposed to do — empower people with facts, understanding, and perspective about important issues.

And the Times has clearly gotten over the red herring fear of “sending people away.” The Lede has helped readers make sense of what they read elsewhere, helping to make the Lede more essential than those other source. In my case, the Lede actually helped me figure out what else to read on this issue — by sending me to high quality sources on a topic of interest, as Google does, the Lede has ensured that I’m going to come BACK for more.

In other words, the Times has given me a reason NOT to go to the WSJ or The Washington Post first, and instead come here first — linking to your competitors is a great way to disintermediate them.

I found this Lede post on the front page, as a supporting item to the original reporting for the print newspaper: 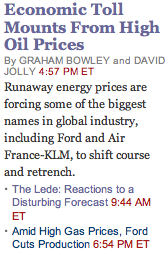 The print story quotes lot’s of sources, but of course it has no links, so the reader has only the information that fits in the article. Readers of Nizza’s link journalism piece, on the other hand, have the wealth of many different sources.

But I think the two pieces complement each other well — the New York Times should look for ways to integrate them more tightly.

I’m waiting for the day when NYTimes.com is bold enough to feature a blog post as a top headline on its homepage, and end the content caste system that separates its print journalism from its online journalism.

I’m curious to learn more about Mike Nizza, who did all of this great link journalism. Too bad he’s just an empty byline with no identity on NYTimes.com. Oh well, I guess the NYT still hasn’t fully evolved on the web (hint: the web is about PEOPLE — and journalists are people, too).

Why Traditional Advertising Formats Fail On The Web

As media companies struggle to figure out their digital future, the elephant in the room is that they have…